I haven’t been writing. I want to be writing but I keep not writing.  Instead,  I have been drinking whiskey.  Drinking whiskey has become fun and writing has become a process, mostly because of me…it’s complicated. I don’t have to worry about that with Whiskey. 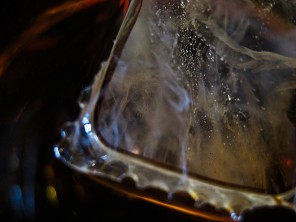 My whiskey education began when I went to buy my husband a special Daddy’s gift for our baby shower.  I wanted to get him Johnnie Walker Blue and asked the guy helping me about it.  He explained that there were other bourbons and whiskeys that were similar or better for less money. He ran down a whole section for me and I was intrigued by the variety and impressed by his knowledge. I took note of everything he highlighted, particularly any brands I had not heard of before (see below), and picked Angel’s Envy (more about that later).

From May of 2013 until present I have been working on that list and developed one of my own. In early 2014, while at a party, I had a realization when someone handed me a Jack (Daniels) & Coke. I took a sip and thought…“Wow, this is weak – it tastes like water.” I felt like the soda was almost more prominent in flavor than the Jack. Then I thought, “Shiiiiiiiiit, I drink bourbon/whiskey. How did that happen?” Now, I have ratings, opinions and preferences. I drink Bourbon Whiskey like people, who are about wine, and savor the layers of flavor. I notice beginnings, middles and endings. They swirl the wine in the glass and I whirl it around in my mouth, especially when I have it neat. There is something to that too – we’ll discuss. I smell it (truth be told I smell a lot of food or drinks in general) but I like that part too. It’s become a thing…my thing. So, I have to “suck” it up and do “research” (aka drink whiskey) and that’s not bad at all. I will raise two fingers to that :).

{All bourbon is whiskey but all whiskey is not bourbon. Bourbon is a type of whiskey. Bourbon cannot “have any flavor or color additives: just corn…”(www.askmen.com). Bourbon can only be called Kentucky Bourbon if it is distilled in Kentucky.}